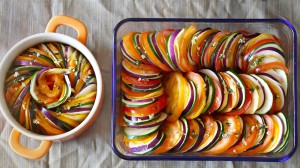 Today we are in the age of multiculturalism. Thanks to the phenomenon of migration and globalization in the same territory in fact find themselves living together people with very different cultures from each other. The differences between the various cultures have not only in language, religion, values, but also, inevitably, on food and eating habits.
What is important, in a world more and more varied, it is the knowledge and above all respect for other cultures different from our own. It is from this base that was born the project Ratatouille. Ratatouille, in French cuisine, is a dish cooked with various vegetables. It means so many different things put together; in this case to put together many different cultures.

It is a project aimed at primary school children in order to convey the differences of various culinary cultures and above all with the aim of eliminating prejudices that often accompany these differences.

This project consists of a series of meetings between the children and the representatives of different cultures (Arabic, Chinese, Japanese, African, Brazilian etc.) To get to know and taste the dishes corresponding to different cultures, and to explain how these foods can integrate into our food culture.

At these meetings will then follow an event where children, divided into teams and accompanied by various cultural representatives, will cook and will enjoy a jury, composed of the principal, some teachers and some parents, different dishes for each culture.

At the end of the event the teams will score data and the dish that receives the highest score will be added to the school year of reference in the menu of the school canteen.

Italia Addressee: Primary School children Key idea: Teaching children how cultural differences could be a plus and not somenthing that could divide from each other Results: work in progress